T’was the night before exam week, when all across my colonized table at Starbucks books, papers, and pens whirled like an ever-changing beast of words and graphs. Keynesian economists dueled with Hayek, “être” flurried through a series of conjugation costume changes to morph into “sera,” just as a nearby marketing textbook flew open, roaring life into a case study of TATA’s acquisition of Jaguar. Peering into this fortress of papers, the barista leaned over with my favorite order of hot chocolate with raspberry syrup (try it sometime!) shooting me a sympathetic look as my pink headphones-covered head bowed over the pages, once more drowned in half a semester’s worth of terms. 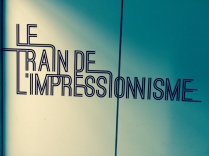 I had nearly retreated completely into my bubble of academia, when the door besides my perch burst open letting in a strong gust of wind. Red and orange leaves blew into the café flirting dangerously with my pages as if to carry them away. It was then that an absurd idea sprung into my mind.

While most people would consider binge-watching Netflix as an effective means of procrastination, I decided to grab my bag, collapse the paper fortress, and escape away to the home and gardens of Claude Monet in Giverny, Upper Normandy. Without a second thought, I whirled through the metro tunnels to Gare Saint-Lazare, where an absinthe green train (appropriately named The Impressionist) puffed a stream of smoke as well as any Parisian smoker, waiting just long enough for me to buy a ticket and literally jump on board as the forest green doors closed behind me.

My adrenaline-filled heart pounded in disbelief that I actually run off from all studious responsibilities, but I grinned mischievously giving into my irrational side, as my iPod playlist shuffled expertly to match my wacky mood as thoughts of exams and cutting close deadlines drifted away. Soon the Paris scene blurred away to the gold and green French countryside. The Impressionist Train barreled north towards Rouen, ejecting me at Vernon, the closest station to the village of Giverny, where I arrived along with three rather crazy British girls. After a few minutes of waiting in deserted Sunday Vernon, a black car driven by a man in a top hat appeared as though my wish for a taxi had summoned him.

“Je peux vous promettre que vous n’avez jamais vu quelque chose comme les Jardins de Monet,” smiled the gentleman I decided was this Wonderland’s Mad Hatter. He tipped his hat and the four of us got into the car, whizzing down the curved single-lane country road, past the orchards of fire-colored trees, beyond the green pastures, deeper into gold trees so heavily ornamented that they embraced across the narrow street for support. The mad British girls were blaring rap music, so incongruous to our French setting, but our strange driver didn’t seem to mind. Suddenly the car lurched to a stop.

“You have reached where you need to go, mademoiselle.”

I got out of the car – which sped off immediately along with the Mad Hatter and his passengers – and followed a signboard through a manicured series of hedges that led me down into a rabbit hole sort of tunnel… and up into Monet’s Garden, a place that I’m not sure is entirely of this world.

People say that when there’s enchantment about you can feel it by the way the air tingles across your skin. From the moment I entered the garden, I could understand why it had become an artist’s Wonderland, why Monet and his fellow Impressionists had become so drawn to and inspired by Giverny. The light fragmented through the tendrils of the weeping willows such that every petal and leaf seemed to glitter in Technicolor. Sunflowers stood taller than me, lily pads swirled in the water besides, and a serene silence – save for the chatter of birds – hung in the air as though Time itself had stopped, rewound itself, and taken me back to the Original Garden of Adam and Eve. After walking across the blue Japanese bridges, so often featured in Monet’s paintings, I made my way around the lily pond to Fondation Monet, the artist’s maintained house and studio built in 1883, which overlooks the estate, though its ivy covered walls almost blend the large house into its magnificent natural surroundings. 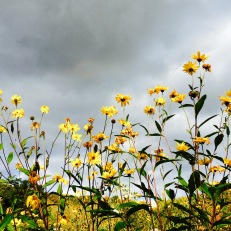 My afternoon in Giverny was truly like walking into a fairytale, where I could stroll into the tableau of each of Monet’s paintings. Having experienced the enchanted atmosphere of the village, I can finally understand why the founder of Impressionism would actually move base from the absinthe illusions of Montmartre, Paris to instead capture the organically surreal lighting of the gardens. Giverny’s spell lasted over Monet for twenty years, where he painted some of his most celebrated works alongside with his family who joined him in this countryside Wonderland far away from the troubles of Paris rent, cigarette smoke…and exams.

As luck would have it I escaped to Giverny the last weekend that the Monet Gardens were open to public before the Artist’s Wonderland sealed the rabbit hole for the winter. So, was it a mad idea to run away on the eve of exam week? Most definitely. “But let me tell you a secret, the best [ones] usually are.”

A Dubai-based blogger, I write about travel, theatre and lifestyle in the cities I explore around the world. Follow me on Instagram @nikitalyfe and follow via email if you enjoy reading my posts! View all posts by Nikita Taimni